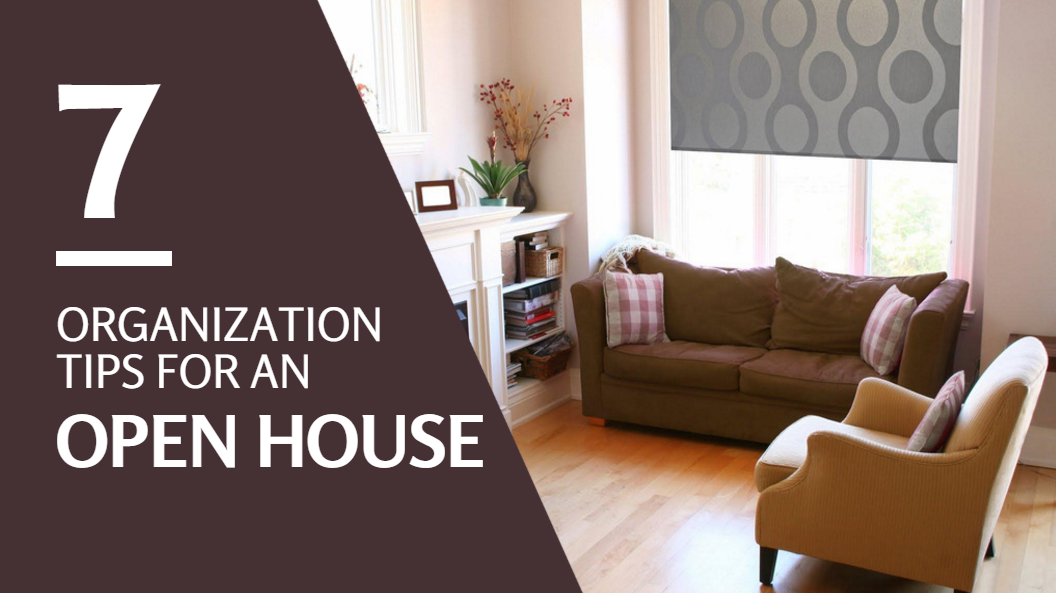 Getting a home ready for an open house is a big project and requires proper preparation in order for it to be a successful event. Marketing, deep cleaning, enhancing the ambiance, and repairs are among the many items on the open house to-do list.

Organizing the home and staging the home are crucial to an open house. Follow these handy organization tips that can increase the value of your home in the eye of homebuyers.

Remove Everything From Countertops

Especially in the kitchen and bathrooms. These places are often the make-or-break point for many buyers. This is also a great time to get rid of paper clutter once and for all!

Put away and tidy up books, straighten pictures and ornaments, and remove clutter to leave shelves open and pleasing to the eye. Visit Pinterest for some great shelf decorating ideas.

The temptation to stuff everything in closets or bathroom cabinets is real. The problem is, homebuyers like to look there too. Make sure to use baskets, bins, and other organizers to make things less cluttered.

Move Pets and Pet Stuff Out of the House

Get this done a day or two before the event. Having a neighbor or friend take care of your pet makes cleaning easy and rids the home of potential allergens for some buyers. Allowing a couple days between the pets’ removal and the open house would also help eliminate any lingering pet odor.

Spruce Up the Yard

The front of the house is the first thing prospective buyers see when arriving to a home showing. Curb appeal is essential for assessing home value. Mow the lawn, trim hedges, weed the garden, and put toys and equipment in the garage or a storage unit.

Move Vehicles Out of the Garage

I recommend leaving as much open space in the garage as possible because it makes it appear larger. Homebuyers want to know how much space would be available to fit their own stuff. Find a place in the neighborhood where it would be okay to keep the cars parked during the open house.

Push Furniture Against the Walls

This opens up the room and looks tidy. Try moving around excess furniture to lesser used areas, perhaps the basement, if an area is too crowded.

Remember: less is more. Organizing for an open house is typically not the same as how you would organize the place for everyday living. The idea is to keep items away and out of sight and open up the space to a model home status. 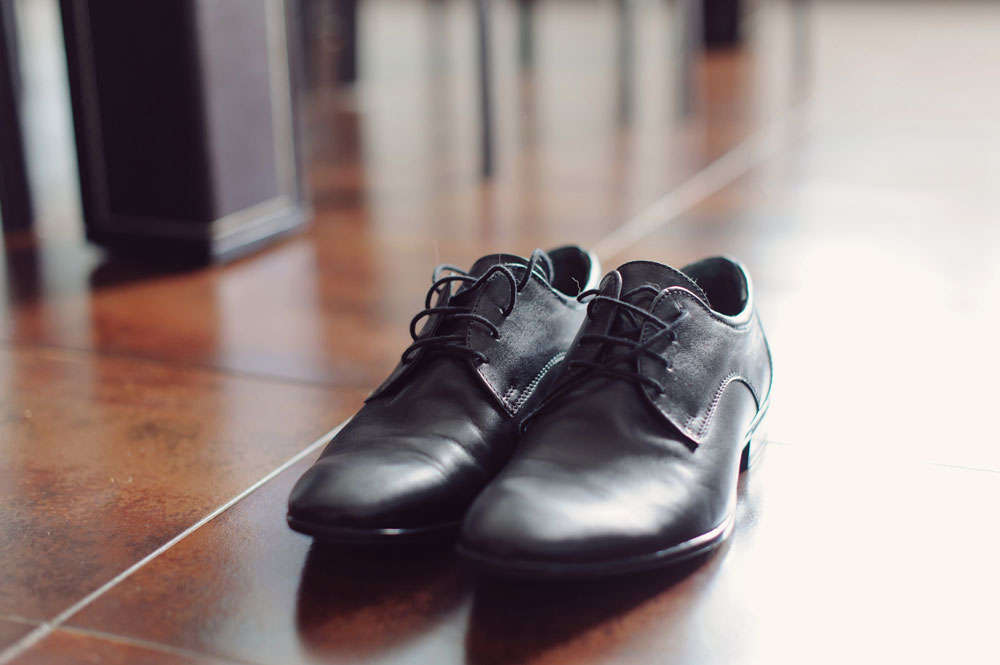 Remember back in Career Ed when you put yourself through mock job interviews as practice? Your open house is a practice look for buyers. They spend an afternoon perusing houses and neighborhoods to gather information on what might be a good fit for them, then head back to their Realtor with what they’ve found. If you want your house to be in that list of homes they absolutely must see again, consider these tips:

Knowing what kind of buyer might be interested in your home is the first step towards a “sold” sign. HGTV notes, “Think about what kind of neighborhood you live in. Is it young and hip and filled with first-time buyers, or is it mature and established with lots of families? It’s important to know what type of buyer you’re targeting so you can stage accordingly.” Ask your Realtor to answer these questions for you; they will advise you how to stage your house for your particular target market.

Of course you’re going to clean your home, but you can add an extra wow factor by going just a little further. Replace your house numbers if they are old and faded, clean out gutters that are full of leaves, dust the tops of those ceiling fans you’ve been avoiding for months. Make everything shine! And when you think you’re done, invite a neighbor or friend over to point out anything you may have overlooked. But don’t just shove the mess into a closet or spare bedroom hoping no one will look in there. Anything that is “off limits” will invite buyers to continue their home search elsewhere.

Let it go…Let it go…let your personal belongings go. You want a buyer to easily visualize their family living in your house. Of course you’re proud of the refrigerator full of report cards and art projects, but your family’s personal imprint on the house will only create distance between it and a buyer.

Making your home aesthetically pleasing is catering to just one of the five senses. Consider how your home smells, but be careful of going overboard. You want a fresh, nearly odorless aroma to invite in potential buyers. An open window or the subtle scent of a fresh batch of cookies is plenty. An overpowering scent will push buyers out the door for some fresh air, ultimately leading them to the next house.

On average, Woods Bros Realty offers more than 50 open houses a week, making open houses an excellent starting point for buyers. Before your first open house, consult your agent about your particular market area, as well as the habits and preferences of your potential buyers. As always, they will be your best source of information and guidance.

Real estate professionals across the country–and worldwide–will hold open houses this weekend in their local communities to spotlight home ownership as part of the 2011 REALTOR® Nationwide Open House event.

About 250 local associations from 30 states will be participating in an event designed to build buyer momentum around home ownership during tens of thousands of open houses.

The nationwide open house event began several years ago in a few markets, but has since expanded to hundreds of communities, in which real estate professionals not only use it to spotlight homes for sale but also use it as an opportunity to educate the public about the benefits of home ownership, according to the National Association of REALTORS®. Several countries internationally are also taking part, including real estate professionals in Canada, Denmark, France, Sweden, United Kingdom, Peru, and others.

The event, June 4-5, falls in the midst of what is typically prime buying season. And recent housing news gives real estate professionals plenty of encouraging news for home buyers: The National Association of Home Builders reported last week that home affordability reached its highest level in 20 years, making the purchasing power for buyers better than it has been in decades. Plus, Freddie Mac reported last week that for the sixth straight week fixed-rate mortgages inched down, reaching new lows for 2011.

“Home ownership benefits individuals and families, as well as strengthens our communities,” Karen Parkin, 2011 president of the Wilmington Regional Association of REALTORS® in North Carolina, told the Cape Fear Business News. The association is among many nationwide participating in the event this weekend. “Through this nationwide event, we will not only educate the public on the value of owning a home, but also help those who are striving to become home owners take steps toward achieving their goals.”

In Washington state, real estate agents were estimating that up to 7,000 homes would be participating in the event.

Real estate professionals are invited to hold open houses in their area to join in the nationwide open house event. For more information, contact your local REALTOR® association for details about how to participate.

Local home sales have fallen behind last year’s pace, after being up for most of this year because of the homebuyer tax credit.

As of Aug. 31, there had been 2,490 home sales through the local Multiple Listing Service, which covers Lancaster and parts of surrounding counties. That’s down more than 5 percent from the same period last year.

Through the first two quarters of the year, home sales were up 13 percent over 2009, but sales have dropped off sharply in July and August, down more than 50 percent compared with the same months last year.

That’s largely because of the expiration of the federal tax credit of $8,000 for new homebuyers and $6,500 for repeat homebuyers. The credit expired at the end of April, and buyers had until the end of June to close those sales.

Despite the sharp drop-off, there are still many positive signs in the local real estate market.

Sales of new homes, which last year eked out their first year-over-year gain since 2003, are up about 6 percent so far this year.

And average sale prices for new and existing homes are up, leading to an overall price increase of more than 2 percent through August.

Realtors Association of Lincoln Executive Vice President Nicole Jensen said in an e-mail last week that those two developments are signs that the market is stable, despite the drop in sales of existing homes.

Another positive sign is the increase in luxury home sales.

HomeServices of Nebraska, which owns Home Real Estate and Woods Bros Realty in Lincoln, said in a news release Wednesday that sales of homes more than $500,000 are up 11 percent this year compared with last.

“Buyers in the upper price brackets are taking advantage of today’s low interest rates,” said Gene Brake, CEO of HomeServices of Nebraska. “They can get more house for less money than they could a couple years ago.”

Mortgage rates have been hovering at historical lows around 4 percent for several months.

Another reason for the jump in high-end home sales is the “move-up” effect.

As new homebuyers used the tax credit to buy lower-priced homes, it allowed the sellers of those homes to “move up” to bigger, more expensive ones.

In an effort to capitalize on the strong demand for higher-end homes, Woods Bros and Home are planning an open house tour of 22 of the more than 60 houses over $500,000 currently on the market.

“Our inventory of luxury homes really cleared out the end of last year and the beginning of 2010,” Hunt said. “Now we have a new influx of homes on the market that are great values, and we want people to come out and take a look.”

There’s a glimmer of light in the Lincoln real estate market. Home sales over $500,000 are up 11 percent over last year.

This is good news considering that sales below $500,000 are down nearly 9 percent, according to the Midlands MLS. Local real estate agents are crediting the chain reactions caused by the home buyer tax credits, in addition to extremely low interest rates.

“Buyers in the upper price brackets are taking advantage of today’s low interest rates,” said Gene Brake, CEO of HomeServices of Nebraska, and Woods Bros Realty. “They can get more house for less money than they could a couple years ago.”

There are currently more than 60 homes listed for sale over $500,000, and one group of REALTORS® is working together to help the public view many of them in one evening. Several Woods Bros Realty and HOME Real Estate agents have teamed up to host 22 open houses over $500,000 on Thursday, Sept. 30, from 5:30 to 8 p.m.

For more information about the Luxury Home Tour, visit www.WoodsBros.com.

WHAT: The purpose of this first ever REALTOR® Nationwide Open House event is to increase consumer awareness of the benefits of buying a home, give sellers an opportunity to increase the exposure for their homes for sale, and to make one last effort to help buyers take advantage of the homebuyer tax credits before the April 30, 2010 deadline.

WHO: The REALTOR® Nationwide Open House event is a collaborative effort sponsored by REALTOR® Associations across the nation.

WHERE: Homes will be open all across the city, state and the nation.